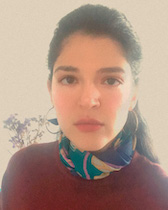 Jessica Passos received her B.A. in Communication Studies from the Federal University of Bahia (Brazil) in 2010 where she wrote her bachelor thesis on transmedia storytelling in cinema and television. Before beginning her studies at Northwestern she conducted graduate work at the universities of Heidelberg (Germany) and Massachusetts (Amherst) where she focused on the intersection between cultural studies, philosophy and literature. In cotutelle with Sorbonne Nouvelle Paris 3, her dissertation brings to the foreground overlooked artworks in poetry, cinema and radio produced during the early and late periods of surrealism which express an acute attentiveness to voice’s power to enrich the imagination by defying the limits of representational function and affirming itself on the side of pure creation. Her project examines different valences voice acquires when confronting its others, e.g., writing, body, image, in order to uncover a poetic and disembodied voice produced by different effects of voicing. As a concept, voice helps to unravel questions about body fragmentation, modern practices of listening, presence and absence, and anti-fascist politics. Locating voice in the center of her studies on the multimedia career of Robert Desnos allows her to explore unheard intersections of poetics, media, sound and cinema studies, while drawing from the philosophical works by Jacques Lacan and Jacques Derrida. More broadly, Passos is interested in Marxist theory and politics, and feminisms.