Assistant Professor of French; Director of Graduate Studies in French 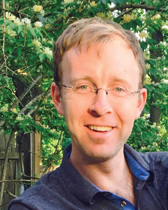 Christopher Davis holds a BA in Classics from McGill University and a Ph.D. in Comparative Literature from the University of Michigan. His research focuses on medieval French, Occitan and Classical literatures, particularly lyric poetry, medieval theories of poetry and language, medieval textual culture and the circulation of medieval Francophone literature in a Mediterranean context. His current book project, The Empire of Song: Latin, Vernacular, and the Transmission of Troubadour Lyric examines the dialogue between Occitan and Latin as languages of literary authority during the twelfth and thirteenth centuries. This project argues for the importance of troubadour lyric anthologies in conceptualizing new models of literary and linguistic authority distinct from Latin. It also contends that anthologies in Occitan serve not only as literary and linguistic exemplars, but as cultural handbooks, which stage debates about the changing political and cultural roles of the vernacular as a literary language. The Empire of Song thus situates the competition for prestige among vernacular languages and genres within historical and political frameworks, including the expansion of medieval empires and trade routes throughout the Mediterranean, the emergence of national languages and the increasingly broad circulation of vernacular literary texts. Before coming to Northwestern, he was a Mellon postdoctoral fellow in Classics at Kalamazoo College, the ACLS/Mellon New Faculty Fellow in French and Comparative Literature at U-C, Berkeley and a Visiting Lecturer in French and Italian at Princeton, where he taught courses on medieval travel narratives, Arthurian romance and troubadour lyric, among many others.