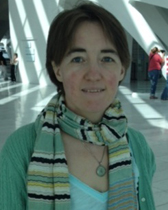 Dominique Licops holds a Licence in Germanic Philology from Université Catholique de Louvain-La-Neuve (Belgium), an M.A. in Literature from Commonwealth Countries from Leeds University (UK), a PhD. in Comparative Literary Studies from Northwestern University, and a graduate certificate in Gender Studies, also from Northwestern University. Her doctoral dissertation is a study of metaphors of identity in Caribbean Francophone and Anglophone Literature. She has published articles on issues of identity and its representation in images and metaphors, and on the work of Aimé Césaire, Maryse Condé, Gisèle Pineau, Assia Djebar, Brigitte Roüan in among others, Thamyris and Women's Studies Quarterly. Her latest articles, "Reading and Danger: The Emerging Writer in Maryse Condé’s and Gisèle Pineau" and "Métaphores naturelles et identité culturelle dans l’oeuvre de Gisèle Pineau", have appeared in Women in French Studies and Nouvelles Études Francophones, respectively. She recently contributed to “Teaching Diversity and Inclusion: Examples from a French-Speaking Classroom." Her interests are in French and Francophone 20th century literatures and cultures, Caribbean Women Writers, and Comparative Approaches to Postcolonial and Gender Studies.

Professor Licops is currently teaching a range of French language courses and courses on French and Francophone literatures and cultures in the French department and for the School of Professional Studies. She is the Administrator for the Paris Program in Critical Theory. She is a member of the Council on Language Instruction (CLI). She has been selected for the ASG Faculty and Administrator Honor Roll in 2011-2012.

She served as Director of Undergraduate Studies from 2009 to 2012, and enjoyed working closely with the Student Advisory Board representative and her colleagues to promote undergraduate initiatives such as the Pause-Café and to create the FIT Undergraduate Events Committee. She taught several freshman seminars and served as freshman adviser several times between 2007 and 2012. She assisted her colleagues Doris Garraway and Christiane Rey in organizing the film series "Haïti on Screen" in May 2010 in response to the January 2010 earthquake.