Associate Professor of Instruction in French; Director of the French Language Program 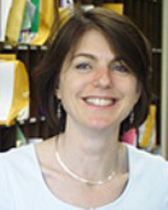 Margaret currently holds the position of Director of the Language Program in French. She teaches 100 and 200-level courses at Northwestern as well as French 309-French for the Professions – Business. She works closely with the Graduate teaching assistants and peer tutors of the Department. Margaret has been an active member of the Council on Language Instruction (CLI) since 2003, served as CLI Co-Chair from 2009-2011, and currently serves as CLI Co-Chair of the Study Abroad committee. Very interested in study abroad, she was study abroad adviser for French from 2004-2021, and served on the University Study Abroad Committee from 2009-2021. Since 2003, Margaret has been a faculty fellow at the International Studies Residence College (ISRC), served as ISRC Master from 2008-2012, and currently holds the position of Associate Chair. She and her colleagues, Aude Raymond and Katia Viot-Southard, sponsor the weekly Table française lunches at Allison Dining Hall. For two years, Margaret served as the Advertising Manager for the French Review, the main publication of the American Association of Teachers of French (AATF).