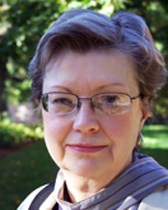 She has taught French literature of the 17th and 18th centuries, particularly novels and theater, from a perspective that combines studying literary form and style and situates these works in their historical, social, and philosophical context. She has taught courses on writing by women in the eighteenth and the twentieth centuries from a similar multi-layered perspective. She is a member of the North American Society for French Seventeenth-Century Literature, the American Society for Eighteenth-Century Studies, the American Association of Teachers of French, and the Modern Language Association. She is a past chair of the Women's Studies Certificate Program.